At Daly we get asked a lot of the time “Which is better, air source or ground source heat pumps?” This Blog aims to inform the reader on the key differences and identify where one may be more suitable than the other.

System Differences
The key difference between both units is that a ground source unit will sit inside the dwelling (normal space requirements would beminimum 1.5m width and 1m depth) and is therefore not subjected to changing outside weather conditions, whereas the air source heat pump will sit outside the property, normally close to a Utility Room or Cloaks/Store. There are “split” models of air source heat pumps which allow the outdoor unit to be placed up to 70m away from the indoor controls in the house with minimal loss in efficiency. With a ground source heat pump the heat is extracted from the ground and will have a nominal temperature of 8 to 10oC, which provides a consistent heat to the building throughout the year. There are two main types of collector which are horizontal ground loops and vertical boreholes. The horizontal collector is the more common option and an average house will have 600m of pipe installed which would cover an area of approximately 600m2. The pipes are laid 1m apart in trenches which are 1.2m deep. There are two key considerations to keep in mind when designing a ground source heat pump system which are as follows:

(a) Run Hours: If we design a system to run X number of hours per annum in a well-insulated building and the heat pump runs more than this due to poor build quality the net effect is that the GSHP is extracting more heat out of the ground than what the ground collector was designed for. This can result in the ground collector becoming less efficient over time. On the flip side if the run hours are lower than expected the incoming brine temperature will be higher as a consequence of the ground getting more time to recover and recharge itself by means of sunshine and rainwater. As a result, the GSHP efficiency rating will be higher which ultimately means lower energy costs. With any heat pump, the closer the incoming temperature (air or ground) is to the outgoing temperature (water into heating system), the more efficient the system will be. When we turn on a GSHP for the first time, the COP could be between 7 and 8 as there has been no energy extracted from the ground yet and the water temperature in the heating system will be low.

(b) Ground Conditions: Soil type has a big bearing on the performance of the system. At Daly we send samples of soil taken from the proposed site and have it tested in a laboratory to establish the thermal conductivity rating of the soil. The higher the rating (usually ranges from 1.0 to 2.5 W/mk) the more conductive the soil is which means it will be better at transferring heat. The GSHP System has a de-superheater function which gives you an abundance of free hot water in the winter as it takes the excess heat from the hot gas on the refrigeration circuit inside the machine and tops up the cylinder when on heating mode. This can also result in hot water temperatures of up to 70oC, which is 15oC higher than what can be achieved with air source heat pumps. An air source heat pump will extract heat from the ambient air outside and its efficiency will be affected by the outside air temperature. As the weather is naturally colder in Winter Months the COP (coefficient of performance) is therefore lower with air source heat pumps as a result of this. During colder weather the Air Source Heat Pump will have to perform a defrost about once every one to one and a half hours. This can take 2-5 minutes to complete depending on the ice built up on the evaporator. During this time the unit will reverse the cycle of the system and take heat back from the house to de-ice the heat exchanger. However, the system will still work when outside temperatures drop to -20oC due to the difference in temperature of the ambient outside air and the refrigerant gas inside the heat exchanger which is lower than this, enabling the transfer of heat.

Due to the difference in heat sources for both the COP of the Ground Source Heat Pump will usually be in or around the 4.5 to 5 when combined with Underfloor Heating, whereas the COP of the Air Source Heat Pump will usually be somewhere between 3.5 to 4.3. The COP figure can sometimes be lower in a low energy home and the reason for this is due to the fact that the heat pump is spending less time doing heating than a normal home. The COP when heating water will be less as it is having to run at a flow temperature of 55 Degrees. Both systems when operating are quite quiet in operation and we will advise if any sound insulation needs to be considered at the time of system design. They can also be installed in existing houses and we have cases where customers have made significant savings in their energy bills by retrofitting heat pumps and keeping their existing oil boiler in place as a backup. In New Houses a backup heat source is not required as we can work in conjunction with your builder and architect to ensure the insulation and air tightness is correctly specified which is the foremost step in creating a low energy home.

Capital Cost and Running Costs?
A ground source system will cost approximately £3,000.00 more than a typical air source heat pump system without factoring in the cost of excavating trenches for ground source pipes. An average system installed can be between £8,500.00 to £13,000.00 (Excluding VAT which is 0% for New Build & 5% for Existing Houses) depending on the size of house based on a horizontal collector system. The average air source system would be between £6,000.00 to £8,500.00 (Excl. VAT) for design,supply,installation and commissioning. We have found from reviewing previous installations (we have a couple of hundred of both types installed in the UK & Ireland) that generally the running costs with ground source heat pumps on average tends to be 15% to 20% lower than air source heat pumps due to the differences highlighted above. On average when compared to an oil boiler system based on an oil price of £0.50/ litre, the running costs for heat pump systems will usually be 50 to 60% lower when linked with an underfloor heating system. When Solar PV or Solar Thermal are linked to the system running costs would be even lower as both can contribute to the production of hot water for 6 to 8 months of the year.

We are happy to chat through these choices with you. Just give us a call. 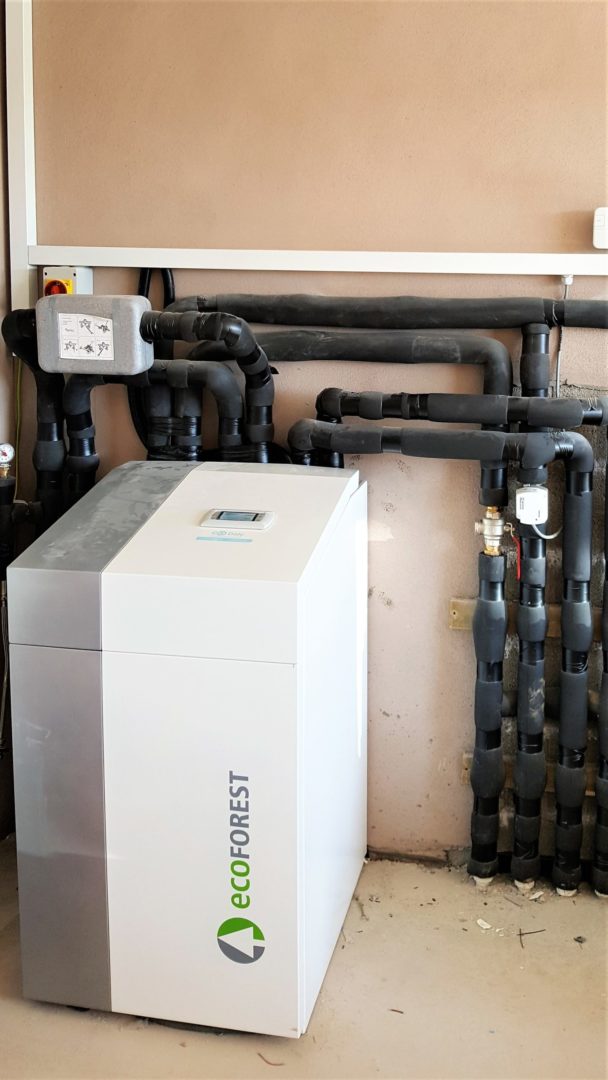 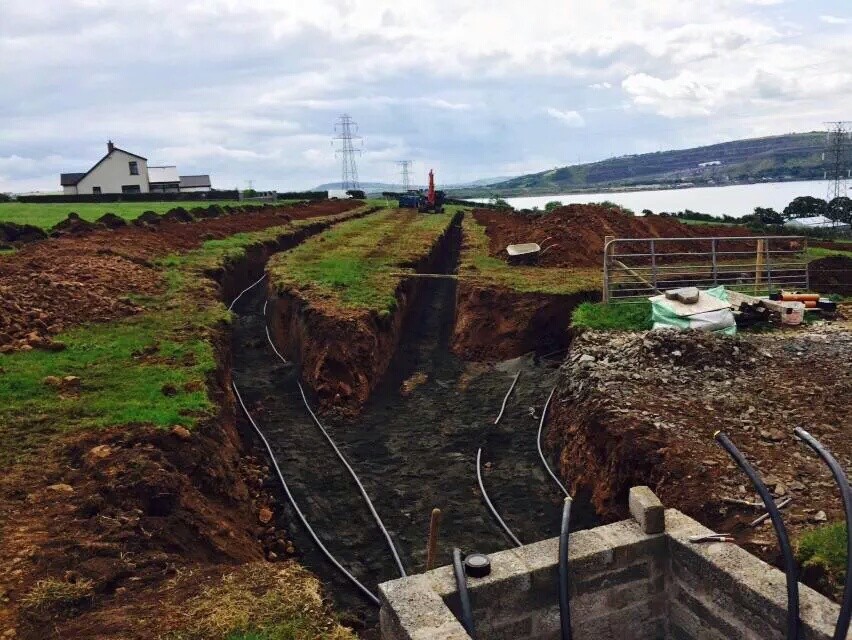 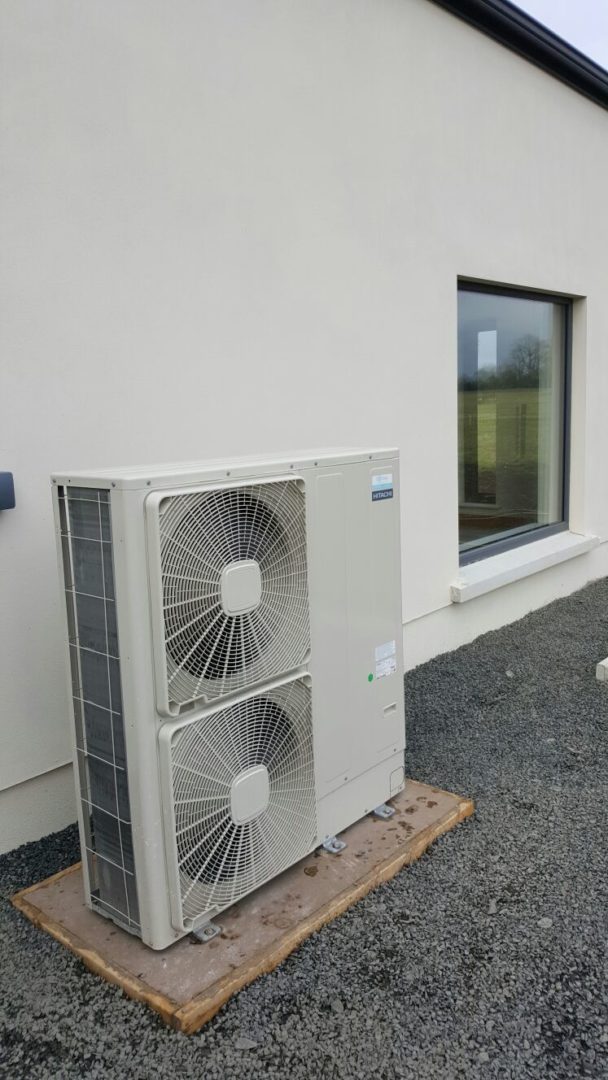